Zookeeping was a male-dominated profession in the late 1960s when 11-year-old Marisa Paulat announced to her parents that she wanted to take care of the animals at Como Zoo. A decade later, when she was finally old enough to apply for a position, there were still just two women on Como Zoo’s staff, “and they made it clear they didn’t want to hire any more,” Paulat says, remembering the demanding physical endurance test she was required to pass in 1979 before she could be considered for the job.

“The idea was to weed out any women who were going to apply. But I practiced all summer running 50 yard dashes with a 50 pound sandbag on my shoulder,” she says. “I was not going to let them take this chance away from me.”

That tenacity helped earn Paulat her dream job caring for Como Zoo’s large cats, where she’s enjoyed a reputation for winning over felines too big to be toyed with. “If there’s one thing I’m good at, it’s breaking through to challenging animals that have maybe had some bad experiences in their lives,” she says. “Sometimes it takes months of perseverance, but if you leave me alone with them, I will break through.” Set to retire in late June after 43 years of service, Paulat recently sat down with Como Friends to share her secrets for making the world’s largest felines fall in love with her.

Zookeeping as a profession has really evolved over the last 40 years. What was it like when you started?

What surprised me when I first started was that it was more of a civil service job than it was about animal care, and there weren’t a whole lot of us on staff. So zookeepers were the jack-of-all-trades—we did the maintenance, we cleaned the buildings, we closed the gates, we did security, we made the public announcements, we answered the phone, we did the secretarial work, we got everyone off the zoo grounds at the end of the day. We counted the money from the pop machines and we weighed the big anaconda. If there was anything to do, we did it.

Your tenure also coincides with Como’s transition from being a small city zoo, to becoming an accredited zoo with a strong reputation for animal care.

Yes, one of the highlights of my career was being here from the very beginning and watching Como evolve the way it has. Como Zoo was supposed to close when they built the Minnesota Zoo—that was the game plan. But the neighborhood didn’t want that to happen, and instead, helped us to improve.  I was part of the very first accreditation process with the Association of Zoos and Aquariums which was really hard work, and we’ve been continually reaccredited ever since. Enrichment is, in my eyes, the most important thing we can do for animals, and that began to grow at the same time new buildings were going up. The building that enabled the Zoo to move forward the most was the new Visitor Center in 2003—that’s when things just skyrocketed forward with higher-end functions like classrooms, and rental space for weddings, and a beautiful building for the community. Being able to reach out to the public like that helped us to move forward faster.

Teaching the public about what zoos can do to support conservation has also moved front and center at Como.

That’s really true. One of the things I’m very proud of is what we’ve done for cougars. In the old days, we had cougars that had come from people’s homes as pets, which is not something we want to encourage. When one of our cougars died of old age, I talked our zoo director into keeping the exhibit empty for a couple of years until we could rescue orphaned cougars from the wild. In the 1980s, U.S. Fish and Wildlife preferred to euthanize cougars that were orphaned in the wild, so I worked with another keeper in Oregon to convince them that cougar cubs from the wild would have good homes in zoos. Sienna and Sierra were the first two cubs we helped save from the wild, and now, of course, we  have Ruby and Jasper. Every zoo in the nation now gets their cougars from the wild, and we don’t breed them because there are so many orphaned cubs that need rescuing. I’m very proud of what we did to convince them that zoos could be part of the solution.

During your career, you must have given thousands of keeper talks about large cats. Of the 40 known species of wild cats in the world, which kind are your favorite?

The striped and spotted ones, tigers and leopards, are the most beautiful of the cats. But after caring for so many African lions here at Como, I think they’re my favorite. They’re the only species that live in groups called prides, and watching the social interactions between the males and females, the whole family structure, and how the males actually help with cubs, I just find them the  most fascinating.

You became an honorary member of the pride by raising one of Como Zoo’s most legendary lions, Mufasa, by hand from the time he was just three weeks old. How did that happen, and what kind of relationship did the two of you have?

His mother, Wynona, was a great mother to previous litters and other cubs who came after him. But she had a birth canal infection not long after he was born, and pushed him away and stopped feeding him. So it was my job to bathe him, and burp him and bottle-feed him until he could be reintroduced to his sister Savanna at about six months old and learn how to be a lion. When he was just a year old, he broke his leg while he was on exhibit, and I was able to talk him in on three legs to come into the building, because he trusted me. Every morning for 17 years when I walked in, he would vocalize and push his head against the mesh. I had the privilege of seeing the entire life of an animal, from beginning to end, in a way that most zookeepers will never get a chance to see. I was “Mom” to Mufasa until the day he died.

Very few humans will ever get to know a magnificent animal like Mufasa in quite the way you did. What are the secrets to building that connection with large cats, or with any other animal?

There’s only one secret—to love them so much. If you care about them so much, they know and they’re going to respond to that. And then every day after that, every action you take will be based on how much you care, and it’s going to be the right thing. You can’t go wrong then, because you’re working from your heart. 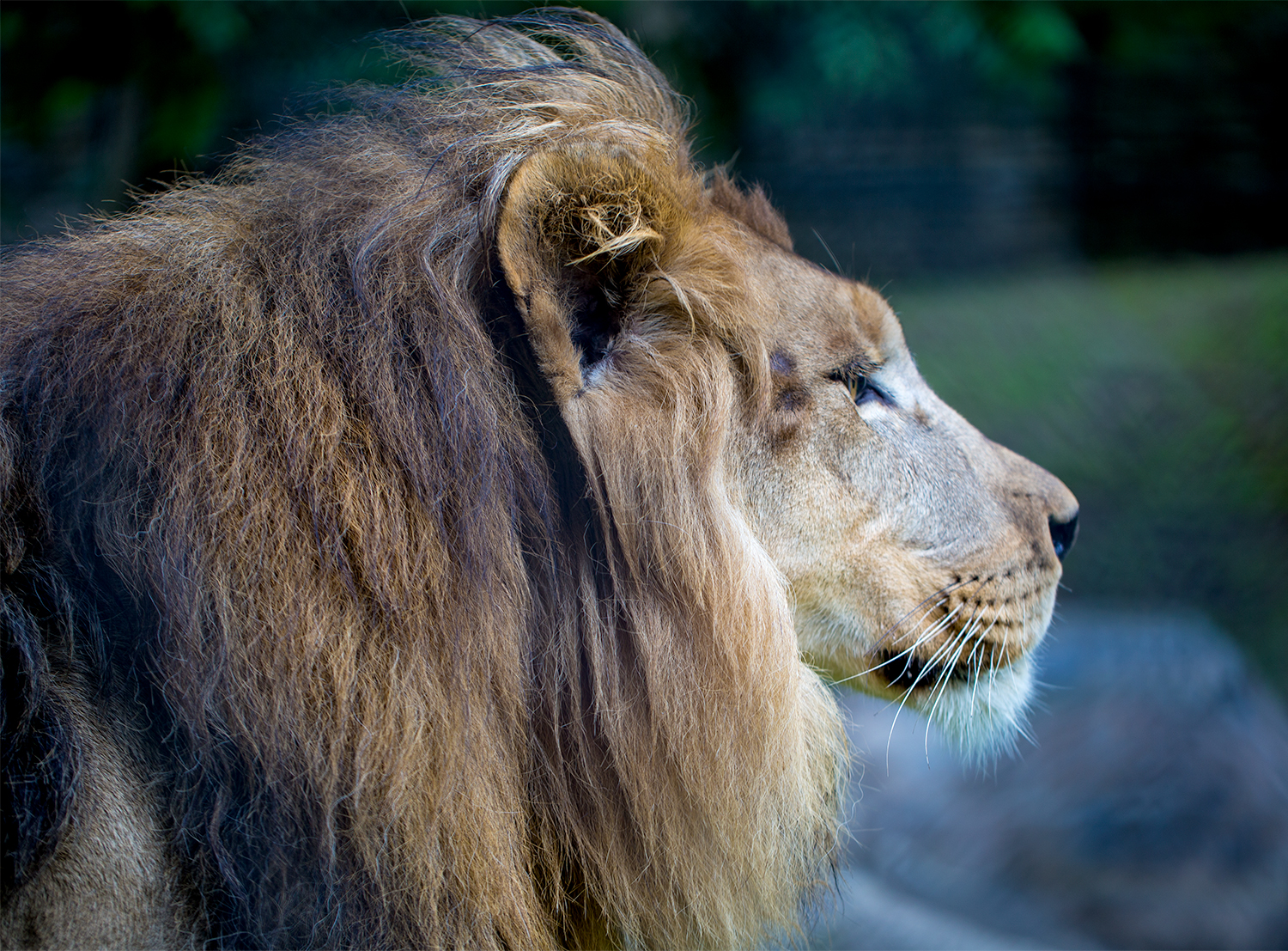 Have you ever had any close calls?

No. Never. That’s my story and I’m sticking to it.

So a prowling tiger or a roaring lion doesn’t intimidate you?

You should be intimidated! If you don’t jump, that makes them feel so bad. But you do get to the point where you expect it and you don’t jump as much. Though every once in a while they’ll try to catch you off-guard.

Any parting advice for your fellow zookeepers?

Yes! I always tell people to squeeze the clicker and not the reinforcement. Never park under the snow leopard habitat unless you want your car to have a very special snow leopard smell after you leave, besides that, my parking spot! Don’t ever move the spoon—my cat keeping colleague Hans will know what that means. Don’t Google “wild cougars in Minnesota”—you have no idea what will come up! Look out for Nicholas, the tiger ghost. Cats aren’t the only ones who like benches. And, find enjoyment every day you have here at Como—it’s a special place.